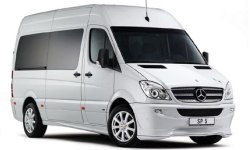 The Mercedes-Benz Sprinter is a multipurpose light commercial vehicle built by Daimler AG and by Freightliner as a knock down kit in the US.  It has been built since 1995 and has been badged under the Dodge and Volkswagen names as well.  Today primarily the Sprinter is under the Mercedes Brand however is still sold as a modified version by Volkswagen as the LT and Crafter.

The Sprinter has gone through only two generational body styles changes over its 20+ year run, with the 1st generation running from 1995-2006 and being broken up into two phases with drastic changes to the powertrain during this time.  Available as both a cargo, passenger and utility van among many other custom configurations; the Sprinter was the answer from Mercedes for US based competitors such as the Ford E-Series and Chevy/GMC Vans.

The second generation Sprinter introduced in 2006 won van of the year just like the earlier Sprinter and its predecessor the Mercedes-Benz TN van.  Additional wheelbase options, along with upgraded V6 engines and transmissions were offered among a plethora of more modern features.

While enthusiasts have been modifying Sprinters into campers from the very beginning, Mercedes unveiled a concept in 2013 at the Caravan Salon with a built in living area and all the accommodations of a Class B RV.  In 2014 an Airstream fitted version was also introduced that was made available to local Mercedes-Benz Dealers.  The Sprinter 4X4 has been planned for model year 2015 featuring 5 body styles and various transfer case/gear ratio options.

To learn more about the Mercedes Sprinter visit the official site for North America by Clicking Here.

If you have anything else to add, please leave it in the comments section below…

Rather you are a buyer or seller and have found this site useful to you, please consider donating to help us provide a better user experience.

Use the search box above for specific models and other unique features.  You can also click on one of the Year or Location links below to see our current Mercedes Sprinter Camper listings.

If you have a Mercedes based Sprinter Camper to sell on our site please use the link directly below.